Greek house don DJ Angelo is back with a new EP

Highly esteemed Greek producer DJ Angelo returns to display his prowess on Stereo MCs’ premium dance label Connected (a label we can’t get enough of here at Revel Rousers). This time his production finesse is poured into the luscious, varied Babel EP, which offers two entrancing afro-house cuts as emotionally rousing as they are exploratory, with deft use of synth, complex rhythms and delicate textures.

Taking prominence on the Greek club scene, Angelo’s adoration for the art of DJing led him naturally into refining a stand-out production style. This translated into stature on the global stage, with high-profile gigs in Ibiza, New York and London, the go-to dance hot-spots of the world. Releases on respected house music imprints such as Tribe Records, Nulu and King Street cemented his reputation as a rising star.

Inspired by luminaries like Black Coffee, Culoe De Song, Manoo and Atjazz, all champions of soul-stirring, Afro house, music runs through Angelo’s DNA. His innate flair for rendering the most impassioned dance floor fillers has become a staple in the record bags of the world’s elite house music DJs, providing a nourishing blend of groovy synth textures and propulsive tribal beats. This is house music that illuminates the human spirit, soulful and transcendent. Angelo’s mesmerizing and unforgettable releases are always highly anticipated, and the Babel EP proves no different.

This spectacular release opens with title track Babel, a deep, cinematic masterpiece that offers squelchy acidic synths, rising percussion and a plaintive female vocal refrain that hangs in the air. Understated and mesmerising, this is another emotive winner from DJ Angelo. The second of the two cuts comes in faster, in the shape of the propulsive Radar, a more direct house music affair that journeys into darker musical territory with jagged synth rhythms and a brooding sense of tension. 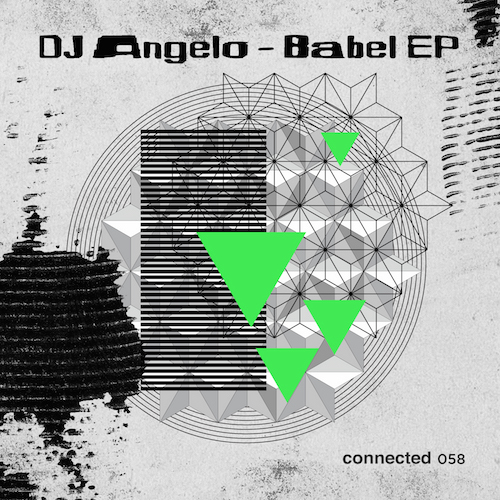 Amulets is a solo project of Portland based audio + visual artist Randall Taylor, an experimentalist who employs handmade cassette tape loops and live processed guitar loops to create live, lush soundscapes and immersive drones. Through the recontextualization of cassettes, sampling, field recording, and looping, these long-form compositions blur the genres of ambient, drone, noise, and electronic music. Randall’s original inspiration came 5 years ago from keyboard player, Alessandro Cortini of NIN (Nine Inch Nails) in regard to his use of a 4-track cassette recorder as an instrument, since then Randall has been utterly transfixed with the medium, and experimental nature of 4 tracks and tapes.

Amulets most recent endeavour has been to create a short film titled, ‘Where The Land Meets The Sea’, fusing the immersive power of image using an old Canon EOS M camera, in accordance with an arrangement he composed using guitar and recorded tape loop. Here is what Randall explains about the piece:

“So, I recently bought a new (old) camera, a Canon EOS M to be exact, and brought it along for a coastal hike a few weeks ago. I of course also brought along a tape loop to record and capture some sounds with. I ended up filming the tape loop and other random footage on the hike and was floored by how everything came out once I got home and reviewed it. I was immediately inspired and wrote a little piece around the tape loop and cut this short film together. Hope you enjoy it!” – Amulets.

In the future Randall hopes to create a full-length film accompanied by his experimental music and continues to take great pleasure in experimenting with the likes of sound and texture of live and pre-recorded layers as well as staying attentive to adding to his Eurorack (modular synthesizer) collection. The experimental nature of Amulets projects is superbly surprising and hugely exciting as he keeps the tangible, physical rudiments of electronic machinery alive through old tape recording equipment in coincidence with instrumentation and the slick, fast paced nature of pre-programmed computer digitalization.

The fusion of both natural and human produced sounds fuses a diverse textural landscape between organic, programmed and sampled. The amalgamation of both old and new, vision with sound, digital with organic intensifies the human musical experience, feeding into the imagination, heart and soul of electronics and the human sensory spirit.

Before the end of last year Randall released a profoundly beautiful companion-album titled ‘Mountains Past / Immortal Yeller’ crafted by Amulets and Bus Gas, both Portland, Oregon based drone artists who have both separately examined the emotional nostalgia of texture and physicality in their music. Physical tape copies of this album have sold out over on Bandcamp; however, it is still obtainable for digital download.

At the beginning of March, Amulets announced that he is currently working on a new record and is stoked to be able to use his thrift mini reel-to- reel on his forthcoming release!

If you dig & delve into the soundscapes and imagination of Amulets through his exceptionally special experimental electronic works, then please do follow his forthcoming project endeavours on the following links below….